Bees do get problems, and they will vary! Be assured, you will come across them all at some time or other. Don’t worry we all get them, old hands as well as new, and we can do little to stop the bees catching disease - just deal with the consequences.

There is no stigma in having disease in your hives and the incidence of disease is quite low. Quite often it is the strong hive of bees that gets disease first because they rob out the weak diseased hive and bring the disease home in robbed honey.

Generally speaking if you buy bees from a reputable source it is unlikely there are more than minor ailments that will affect the bees for years.

The best way to avoid disease is good management.

The colony being Queenless or having a Drone-Breeder or Laying Worker is not really disease, it is certainly a problem which has to be addressed very quickly. If you have bees that are very tetchy, the brood comb has very few cells polished for the queen to lay in, multiple eggs in the cells, such things will point to queenlessness. If in doubt take a frame of eggs from another colony and put in the suspect colony, if the colony is queenless in 4-5 days the comb will have queen cells started on it. If there are no queen cells after 4-5 days the colony has a queen of some sort.

With a laying worker or drone breeder these are easily recognised by large drone cappings on worker cells – re queening is the only answer.

A tip to get rid of such queens or laying workers is to take the brood box about 100 yards away and shake all the bees off the combs onto the ground. Discard the drone brood and then put all the frames back into the box and place it back in the original position. Make up the box with frames of foundation. The queen and laying worker are too heavy to fly and will not make it home (the rest of the workers will). Then re-queen.

THERE ARE TWO DISEASES OF BEES THAT ARE STATUTORY NOTIFIABLE. 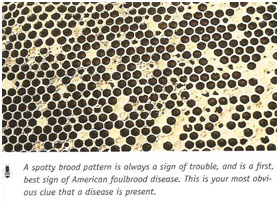 The brood (only the brood and not the adult bee) dies in the cell after being capped. The caps become sunken and perforated.

If you stick a matchstick into an infected cell the diseased larva pulls out in a sticky thread. It also smells rotten.

You are Not allowed to treat and you MUST call the Ministry Bee Inspector.

You are NOT allowed to move the bees, hive, or take the honey. The inspector will come and inspect and if confirmed he will kill and burn the bees and all the frames in a hole dug nearby. The inspector will scorch the remaining hive parts with a gas flame gun to sterilise them. 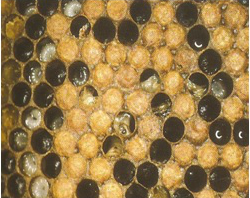 Again, this must be notified to the inspector. With EFB the larvae die before the cells are sealed and become abnormally twisted, eventually turning yellow and then brown. They do not string when tested with a matchstick.

The inspector will attend and look at the bees and will carry out a field test. If there are any doubts they will send a sample to the lab for testing. Again you are not allowed to move bees, hive, or take the honey.

If confirmed, and it’s a bad case, the bees will be treated as above, but if a mild case the shook swarm method will be carried out. (See the Beebase website.)

All frames of the diseased hive will be burnt and the hive sterilised. 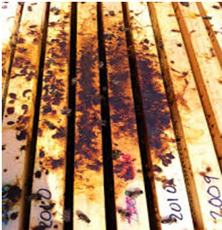 Small single celled organism like an amoeba which live in the gut of the bee. The effect on the bee which is heavily infested is to shorten its life by 50%. The disease is not normally noticed until late winter when the bees soil the outside of their hives.

Colonies with a low percentage normally get better in the warm weather when excretion take place on the wing.

There is no longer any authorised medication available due to EU rules.

Any stained combs in the hive should be exchanged ASAP. 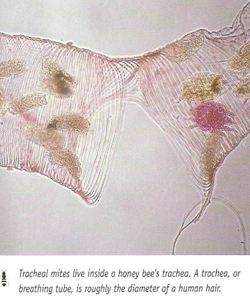 Is a small mite which lives in the breathing tubes of the adult bee. Result is to shorten the life of the bee by about 50%, especially spring dwindling.

Acrine is difficult to diagnose without dissection and a microscope. Adult bees may display "K" wings.

There is currently no approved treatment—suggestion is to Re-queen. Treatment used for Varroa however, i.e Apistan, Apiguard or ApiLife Var do seem effective. 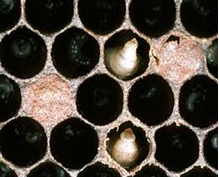 Never a worry, with usually only a few larvae getting the disease caused by a virus. The virus appears to affect the moulting process therefore preventing the separation of the new and old exo-skeletons at the head end and causing large amounts of fluid between the two skins(the sac). The larvae dies with its head turned up in the entrance to the cell. This is known as the Chinese Slipper effect. 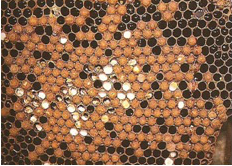 The result of bees eating spores of a fungus. The fungus grows and mummifies the larvae which become white and hard (like chalk). 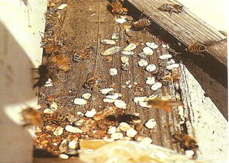 This usually happens when the brood chills i.e. a weak colony with not enough bees.

There is no treatment, but again, re-queening usually solves the problem with a vigorous queen. 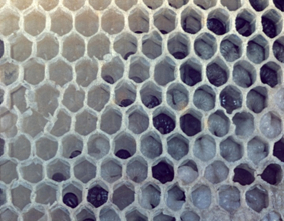 Not a disease as such but chilled brood can be accompanied by starvation, spray poisoning or mishandling by the beekeeper. Anything that reduces the number of bees needed to look after the brood and keep them warm and fed will cause chilling. It is usually confined to the edges of the brood nest.

Signs to look out for —eggs, larvae, and pupa all die at same time. This can be confused with EFB. If in doubt call the Bee Inspector to do a field test. 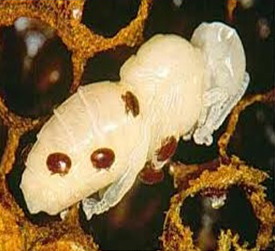 Caused by a mite (crab shaped, being more broad than long). It has 8 legs projecting forward on the front half of a domed shell like body. All Varroa seen on adult bees will be female as the male dies in the cell.

The female Varroa mite is difficult to see as it usually attaches itself to the underside of the bee.

The whole breeding cycle of the Varroa take place in the sealed cell of the bee larvae. The female Varroa enters the bee larvae cell which is just about to be capped. She prefers drone brood as there is more food in it and it is capped longer, but she will use worker cells if drone are not available.

The honeybees that emerge after being infested with Varroa are considerably reduced in value to the colony. They don’t live as long and if badly infested are stunted and the wings do not form properly.

The increase in the Varroa population means that in time the colony will be overwhelmed and die out if nothing is done by the beekeeper.

You actually need to use any of the following treatments as part of an overall management scheme for control of Varroa.

As Varroa prefer drone brood, if we remove drone brood from capped cells using an uncapping fork, by pushing it into the cell the larvae or pupae will be caught on the fork tines and you can then examine them for brown spots (Varroa).

Count the Varroa on the drone brood and gauge the infestation.

As part of the scheme, swap a super frame for a brood frame in the brood chamber, the bees are very likely to produce drone comb on the bottom of it which you can test and discard each time you inspect. You can break off the brace comb and discard it. This will keep the Varroa population down.

Also, shaking icing sugar over the bees as you exit the brood chamber will make the bees groom themselves and thus comb more Varroa off onto the mesh floor.

You can also use a Varroa Floor whilst treating the bees using various Licensed Medications.

These are synthetic pyrethoid preparations in a slow release plastic strip carrier which you hang in the brood chamber between the frames for about 6 weeks. Then ensure to remove it. Kill Rate is 90%

Comprises Thymol Gel medium and is supplied in a shallow foil tray from which the lid is torn and the tray is put into the hive above the brood box. The Gel allows slow release of the Thymol making it more effective and safer that the others. Treatment is 2 trays - 1 tray for 2 weeks then repeat with second tray for 2 weeks. Kill rate is 95% 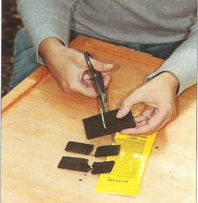 A product comprising Thymol, Eucalyptus, Camphor and Menthol in a vermiculite medium. It comes as a tablet to be cut into 4 pieces and put on the brood top bars, where it is left for 7 days. Treatment is repeated for 3-4 weeks. Kill Rate is 95% 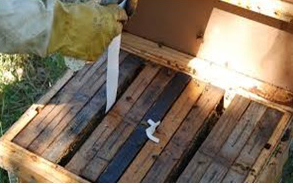 Product containing Amitraz 500. Use in autumn before clustering. Do not use during honey flow. This is a six week treatment period. Place strips between the frames to provide access to both sides. Kill rate 95%. 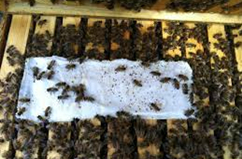 Product is Formic Acid. Place 2 pads on the top bars of brood frames, staggering them so they lay flat across the full width of the hive body. Bees should cover 6 frames or more. Ensure good ventilation – entrance fully open. A 7 day treatment period. Kill Rate 99%

Product is Oxalic Acid. Treatment is by trickling or sublimation when no sealed brood are likely or just a minimum amount. Requires a treatment of 2.3g per hive.

One treatment per year and vaporise for about 3 minutes and keep hive shut for about 15 mins. You must wear protective gloves, goggles and FFP2 mask when using this treatment.

IN ALL CASES READ AND FOLLOW THE MANUFACTURERS INSTRUCTIONS WHEN USING A PRODUCT.

IF IN DOUBT EITHER CALL AN EXPERIENCED BEEKEEPER OR THE MINISTRY INSPECTOR !